Last Saturday, a few of us NAP staff braved the snow storm to see “The Other Sewing Circle” at the Shelterbelt Theater, a play about women living with HIV. 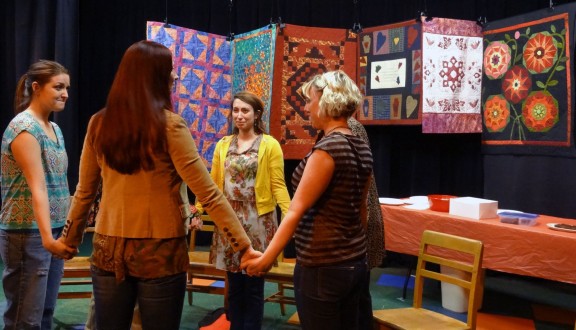 A description from the Shelterbelt: Not your usual stitch and bitch! The newest member of the Edgewood Sewing Circle has no idea what she’s gotten herself into when she first enters the world of a feisty group of quilting fanatics. The group is bonded by far more than their love of feather stitching and patchwork. This new female ensemble play delves into the unique stories of women faced with the repercussions of the HIV and AIDS epidemic at the dawn of the millennium.

I was privileged to sit with two women who have been living with HIV since the 90’s, as well as participate in a panel with them following the play. The depth of their emotions was almost tangible as they reacted to each actress’ portrayal of the issues surrounding living with HIV/AIDS, many of which they had lived through. Some of these issues have thankfully disappeared into history: a lack of supportive services to address HIV/AIDS, medication regimens consisting of 100’s of pills a week, witnessing so many of one’s friends pass away. Fortunately, the United States has improved supportive services for people living with HIV (more is still needed though), single tablet regimens requiring one pill a day to treat HIV are now the norm, and people are able to manage HIV/AIDS more like a chronic disease and not like the death sentence it once was. Unfortunately, some of major issues still loom large – especially the stigma surrounding the disclosure of HIV status to loved ones and the potential repercussions.

I bring up this issue because one of the HIV positive women I sat with is very open about her status. Her name is Cindy White. Cindy has been living with HIV since 1990 and, for as long as I have known her, has been an outspoken advocate for HIV/AIDS issues and an enthusiastic educator to to anyone within earshot. The other woman I sat with, her story, and her dedication to fighting HIV, is no less amazing, but she still experiences anxiety about broad disclosure to the public and is hesitant to share her story for fear of rejection in her community. From my experience working at NAP these are still, sadly, completely valid concerns.

Each person’s situation regarding disclosure is different, but what is common across each situation is the social stigma that clouds how society thinks and feels about people living with HIV and how HIV positive people think and feel about themselves.

Any production be it in artistic circles, entertainment, or in the media can be an extremely powerful educator of our community. With this power comes an immense responsibility for those creating art, writing stories, and reporting the news, because their creations shape how people see themselves and the world around them. Playwright, Marie Amthor, demonstrated a moral and professional obligation to present the authentic experience of women living with HIV/AIDS in the early 2000’s by interviewing women who lived through that era to inform her play. From the reactions of the women I sat with, I think Marie and the performing actresses nailed it. “The Other Sewing Circle” makes space for people living with HIV. The women of the sewing circle are there for each other in good times and bad times, but most importantly reinforce the fact that we can move forward together – that we must continue to move forward together.

Now playing at The Shelterbelt Theater through February 15th.

This site uses Akismet to reduce spam. Learn how your comment data is processed.